We have made this guide so you can quickly compare the best treadclimbers.

Combing the best features of treadmills, stair climbers and ellipticals, the treadclimber has grown in popularity in recent years.

First made in 2003 by Nautilus, Bowflex Treadclimbers were created as an alternative to the treadmill and elliptical trainer.

When compared to each of these, the Treadclimber allows you to burn more than double the number of calories. While using the machine at the same speed as either of the aforementioned exercise machines.

The latest models are the TC100 and the TC200. They are the improved models from their predecessors – the TC10 and TC20.

One of the most noticeable improvements was that they now both include tech features.

Both models had a media shelf added which includes a USB charger. This allows users to conveniently watch and charge their tablet or phone while exercising.

So, if that is something that is important to you, then the Treadclimber probably isn’t the right choice for you.

With two different models for you to choose from, choosing the right model can be a difficult task.

Luckily, in our reviews we’ll go over the pros and cons of each model. You will able to weigh up your options and pick the one which suits your needs the best. 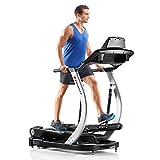 The Bowflex Treadclimber TC200 is the higher end model out of the two Treadclimbers which are available to buy right now.

It forms part of the new line of Treadclimbers, after the TC20 was discontinued.

This particular Treadclimber offers various improvements over its predecessor, many of which are in the console area.

This is perfect for users who are looking to purchase a fitness machine for more than just themselves.

There are four profiles available in total and is double the amount of user profiles which are available on the TC100.

Bluetooth connectivity allows you to sync your workouts with the free Treadclimber app.

This means that you have an easy and convenient way to keep track of your progress.

You can also sync your workout data with other apps such as MyFitnessPal.

This is particularly useful for those who are tracking their calories. This will adjust your calorie goals depending on how many calories you burn in a session.

Many people like to keep track of their workouts nowadays, and so this makes the process much simpler.

What’s more, there is a media holder available on the TC200 too. This provides a convenient place to store a tablet or phone throughout your workout.

This is in addition to the USB port which is available, meaning you’ll be able to charge your smart devices while you work out.

For that reason, the TC200 might be a better option as it gives you more room to progress over time and increase your workout difficulty.

The previous model, the TC20 was highly rated by users. But, can no longer be bought new.

It was discontinued after the introduction of the TC200, although it can still be bought second-hand from online marketplaces such as Amazon.

However, the improvements which were made with the TC200 make it a worthwhile upgrade if it is within your budget.

For those who aren’t able to stretch their budget, then we recommend that you stick with the TC100.

The two models both have the same core features, but are different in that some features on the TC200 are not available on the TC100.

This includes the top speed of the machine as well as certain tech features.

Overall, the TC200 with its numerous features makes a great option for those who have a higher budget.

So, if your budget can stretch to afford the TC200, then you might just find that it suits your needs better. 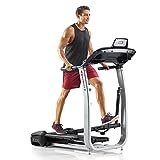 The model with the lowest price tag of the two currently available, is the Bowflex Treadclimber TC100.

A machine which like the TC200, is designed to provide a calorie burning walking workout.

The TC100 is a great choice for most users as it presents excellent value for money. Costing approximately $700 less than the TC200.

It was introduced to replace the now discontinued TC10, and features a plethora of improvements. However, the TC10 is still available second hand.

The console area has been increased in size to make room for features such as large cup holders, contact grip sensors and an improved display.

There is now one large display as opposed to four smaller ones which was the case on the TC10.

The contact grip sensors are used to monitor your heart rate. Unlike the TC200, a wireless chest strap isn’t included with this particular model.

It is possible to customise the integrated LCD display screen thanks to the multiple user profiles.

This allows you to track your progress and guides you towards reaching your fitness goals.

However, there are only two user profiles available on the TC100.

So, if you were hoping for more, then you’d have to consider the TC200 model instead. Which has double the amount of user profiles.

The TC100 doesn’t have bluetooth connectivity like the TC200. But you can still export your workout data via the USB port.

Another disadvantage is that there have been no improvements in terms of program variety and the number of workout programs.

This was something which let the previous model, the TC10 down.

It would have been nice to see this improved on the TC100.

With a speed limit of 4.0mph it is just shy of the 4.5mph limit offered with the TC200.  Although, 4.0mph still gives you a great workout and is more than enough for the majority of users.

The TC10 was a very popular model and offered a great platform from which Bowflex created the TC100. They updated the machine making it compatible with users of today and did a great job doing it.

This particular Treadclimber model was once the top-of-the-range choice, but it has now been discontinued.

In spite of this, it is still available to purchase second-hand via online marketplaces Amazon.

Equipped with 12 intensity levels, you can adjust your workout as you’d like. Giving you room to progress as your fitness level increases.

You are able to monitor your heart rate wirelessly thanks to the chest strap heart rate monitor included with the TC5000.

The TC100 and TC200 are ultimately very similar. We don’t feel the extra features on the TC200 warrant the extra $700 price tag.

So, we’d definitely recommend the TC100 for its affordability when compared with the TC200.

Although if you have the budget and want the extra features, the TC200 is still a great choice for anyone who is in search of an effective low-impact workout.

What is a Treadclimber?

The Treadclimber is a hugely popular hybrid cardio machine which is the perfect blend between the treadmill, stair stepper, and elliptical.

Designed to be low-impact but highly effective at burning calories. This is a walking workout with a difference.

As you walk each treadle rises to meet your foot with every step. This smooth motion reduces the stress on your knees helping to prevent injury.

As we mentioned earlier, there are two models which you can choose from.

These are the Bowflex TC100 and TC200 which we reviewed earlier in this guide.

What are the benefits of using a Treadclimber as opposed to other alternatives?

You Can Burn Calories Faster

Thanks to the 40% incline which is available on the treadclimber, you to burn a high number of calories in a short space of time.

Compared with the same speed on a treadmill or an elliptical, it’s possible to burn up to 2.5 times more than you would on each of these machines.

Although running allows you to burn a large number of calories and obtain great results at a fast rate, it is an exercise which is relatively high impact.

This gives the Treadclimber the edge over the treadmill in that there is far less impact on the joints, but while maintaining a high rate of calories burned.

When compared with other alternatives, the Treadclimber allows to you to engage more muscle groups.

This in turn allows you to burn a higher number of calories.

The vertical movement of the treadles allows the machine to replicate a stair stepper.

This includes the quadriceps, calves, glutes, and hamstrings.

If you have the treadles set to the maximum of 40% incline, you will notice the burn even more in your glutes and hamstrings.

The Bowflex Treadclimber works as an elliptical, stepper, and a treadmill – combining each of these three exercise machines into one.

The forward moving belts allow you to maintain a brisk walking pace.

While the vertical movement of the treadles requires you to lift your foot with each step, which imitates the movement on the stair stepper as mentioned previously.

Finally, there is an elliptical motion as the treadle lowers while you stride forward in your walk.

Each of these movements combined results in a fantastic cardio workout that is both effective and efficient.

Essentially, you’ll be able to take advantage of the perks from the 3 different machines, while at the same time placing less stress on your joints and engaging more muscles.

You may be sceptical when it comes to the calorie-burning potential of the Treadclimber.

But, this particular fitness machine is actually more effective for burning calories as opposed to walking or jogging.

According to the manufacturer’s website, if the treadles are placed on the maximum incline and the speed is set to 3.0mph. It is possible to burn in excess of 420 calories over the course of 30 minutes on the Treadclimber.

Yes, each Treadclimber model comes complete with a warranty for peace of mind should any issues arise.

The TC100 model comes with a 2-year parts and 90 days labor warranty as part of your purchase.

The TC200 model on the other hand comes with a 3-year parts and 90 days labor package.

There are options to extend the warranty at an additional cost if you’d like.

Bowflex also include a six-week money back gurantee just incase you don’t love your treadclimber.

The treadles do not move up and down automatically. The treadle only lowers once weight has been applied.

In turn, this is a movement which is similar to what you would have to perform when using a stair stepper.

Unfortunately, the Treadclimber is not able to fold up for storage.

However, provided you have the space in your home then you’ll find that it is simple to move around. The built-in transport wheels make moving the treadclimber much easier.

As well as this, the Treadclimber only takes up a marginally larger space than a folded treadmill.

So, for many users the fact that the machine doesn’t fold up shouldn’t be an issue.